Yi was the president of a local Taiwanese student association at one of New Zealand’s universities. They were making preparations for an University night market, in which the members of the society were encouraged to dress up in their respective culture’s clothing. Yi the week before the night market contacted the Taipei Economic and Cultural Office in Auckland stating clearly that they needed traditional Chinese attire for the event. The Auckland office happily obliged and said they would deliver it to them on the day of the devent.

END_OF_DOCUMENT_TOKEN_TO_BE_REPLACED

A week ago the New York Times published an article detailing the use of the word ‘Goddess’ by Chinese people to describe Ivanka Trump.

What’s worse is that this story became incredibly popular and soon everyone in the western media started sharing it. The story was re-used by sites like Medium, Yahoo and MSN soon after.

The story is incredibly misleading as it pushes a strong emphasis on the word ‘goddess’ without explaining the cultural context. They also fail explain that Mrs Wang, the Ivanka fan in the article, is no different from a fan of any other idol celebrity in China.

END_OF_DOCUMENT_TOKEN_TO_BE_REPLACED

This is a short overview of the various occupy movements that have occupied and protested peacefully outside the Taiwanese parliament that have received little to not coverage from the western media, especially when compared to the anti-Chinese Sunflower movement.

An assortment of retired police officers and firefighters who are protesting against the substantial pension cuts that President Tsai Ing-Wen are trying to push through. Over 100 000 people marches against Tsai’s government in March.

They are named after the 800 soldiers who famously defended the Sihang Warehouse against overwhelming Japanese forces in World War 2.

Taiwanese indigenous  people led by community leaders such as Mayaw Biho and Panai fighting for the land rights of their people. Many natives were evicted from their homes during the Japanese occupation and have yet to regain these sacred land, the indigenous people want Tsai to stop talking with her mouth and to take action instead by returning this land.

A group looking to reform the Republic of China’s consitution through ideas such as electoral reform as well as changing the 92 consensus. They ultimately want to pursue a goal of ‘permanent peace’ by re-uniting or adhering to more to the mainland. Much of their ideology is based on PRC Xi’s call to for global unity.  They hope to make Taiwan a shining example of liberalism and spread it to the mainland after uniting. 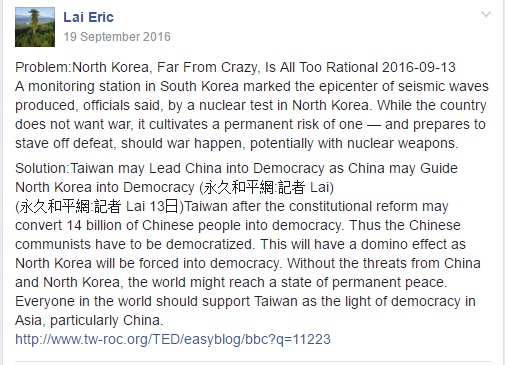 UPDATE: The doctor has been confirmed as a Vietnamese American named David Dao and the petition has already exceeded 100 000 signatures.

United Airlines excessive use of force in the removal of an Asian American doctor from a flight has gone viral in the overseas Chinese community.

Overseas Chinese media caught on quickly about the story and went to work with headlines such as: END_OF_DOCUMENT_TOKEN_TO_BE_REPLACED

Everytime I see Bill Wurtz’s History of Japan” video get shared or linked, I cringe a little bit inside.

Here’s the video for those who have not yet seen it. END_OF_DOCUMENT_TOKEN_TO_BE_REPLACED