Jacky called people from the Chinese mainland ‘dogs’, whilst laughing at the frustrations of other Chinese people.

People were able to connect Jacky to his LoL account, as he used to call himself Piggy in his earlier days. Jacky was honest enough to admit to his wrongdoings immediately but has tried to defend his actions as an emotional reaction. 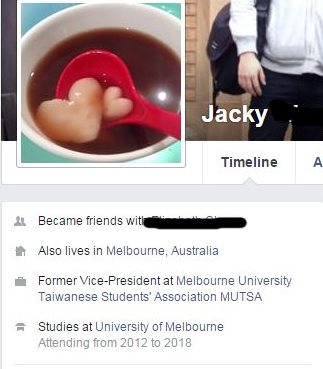 The Melbourne University Taiwanese Student’s Association had around 70% of their funding coming from Mainland students, according to Jacky’s own estimates. An important question that he couldn’t answer was whether he harboured ill intentions while leading the club.

Jacky, refuses to publicly apologise but says he hopes to improve his behaviour in the future.

In my honest opinion, I feel that Chinese and Taiwanese people should be working together as brothers, not insulting each other, but sadly there’s just too much politics in between them now.