LPL and the CSL, the demented connection, it’a nationwide problem

The poorly name Tencent League of Legends Pro League (LPL) in China is famous for it’s extravagant spending, oddly named teams and signing of Korean pros as. It’s almost a complete replication of the other types of sports and entertainment leagues that exist in China.

The premier association football competition of China is the Chinese Super League (CSL), I like to think the ‘super’ relates to the cash. It’s famous for it’s extravagant spending, oddly named clubs and signings of Brazilians. Sound familiar?

To be honest, the LPL almost seems like a baby version of the CSL in many ways. From the way the teams market itself with big name signings, to the ignorance of grass roots level playing. Actually the ownership is nearly a father and son generational difference. The point is, the LPL’s fallacies is very much a symptom of Chinese society in general.

Think of it  in this way, China has  one of the most corrupt football leagues  in the world, it’s honestly not even improving despite all the efforts made due to societal issues, there’s a reason they have a national hobby of hating their own national team. Anyway, so the next generation of Chinese people are not going to be as interested in football, especially when China keeps on drawing with Hong Kong.

So, pretty much, the older generation or those who still see some hope, or perhaps they actually think there’s money to be made in the bottomless pit of red note thieving corruption that is Chinese soccer are still trading around these clubs like Pokemon cards. I mean look at teams like Tianjin Teda, they’ve changed names 5 times, in soccer this is thoroughly taboo unlike e-sports. These owners just sell and buy clubs like changing mobile phones (even though I’m quite sure the owners all have the newest rose gold apple iPhone, so they probably change phones much more frequently, but you get my gist).

The noveau riche’s offspring, the rich 20/30 year old guys who nothing to do except buy their own dog two apple watches or try to find things to invest in, decide that League is fun and they are going to invest. It creates a starkly similar environment towards the Chinese sports leagues that exist today, where before the money came in, there were still a few respectable Chinese talents plying their trade at an international level, but now afterwards, the Chinese talent tree has been cut off at it’s roots.

It is unlikely that the LPL will see any international success until the system puts more emphasis on the growth of native talent, as well as a different approach to pouring copious amounts of money. Especially as the game becomes more team focused in each iteration, weakening the impact of star signings further more.

The recent performance of China at the League of Legend’s World Championship, showcased China’s self medication through money. Big organisations like LGD were knocked out in the group stages. The Chinese bubble was popped once again as the Chinese owners did not heed the second coming of the McCartney embassy: Chinese football. Chinese LPL teams still went ahead with living luxuriously and abundant in their purchases, like the Qing Dynasty  during the end of the 19th century (now also a nickname for the Korean imports). Sure, the two Sino-Japanese wars and the century of humiliation for China, proved to be a wake up call until the once again the nation delved into the penis measuring contest on who could buy the most expensive LV Bag or in this case, Korean players.

The need to focus on native growth is something rarely heard of in Chinese culture. The people of China prefer the goods of the west, forgetting that the Gong (artisan) class were once highly respected within Chinese society as well as the thousands of inventions.  To be fair, the Chinese government has tried to fix the perspective of Chinese people, with first lady, Peng Liyuan, touting native brands but a bunch of band aid fixes won’t solve the low level of prestige that Chinese goods and services have in an international standing, where China is looked upon as the cheap labour force of the world. These views of self inferiority hurt China more than anything. Of course, this is only the perspective from the Chinese towards the western goods.

Then there’s the shift to the other side of the spectrum, where if anyone was to attack the Chinese hivemind, as sinocentrism lies within the blood of the youth still. That all that is Chinese, cannot be comprehended, proving once again that point of the ignorance of the 2nd McCartney Embassy. The Chinese will use your foreign goods to elevate themselves in face value, but forget about actually instilling the ideas that might be beneficial. The Qing was in such a predicament It is similar to how many young Chinese celebrate Christmas, despite not knowing much about Christianity or even who Jesus is. It’s because the Western culture makes them look cool.

What then happens is is the amalgamation of China and it’s society as a whole, the complexity of the issue comes from having to see this through Chinese eyes, but yet also to swallow the pride of failure without losing face instead of pouring notes on the wound. Sure, face is an integral part of East Asian societies, but it is also what holds back people, as striving from the hive mind usually results in ostracization from the community unless great success follows.

Security is a white collar around your neck

Being able to feed yourself in a nation of 1.3 billion people is extremely important. The competition is hectic. Getting one question wrong on that exam, will put you behind another few million people in the rat race, you have to go for that iron rice bowl, that stable white collar job. Yes, that stereotype of parents forcing their children to study to become a doctor/accountant/lawyer or other type of professional white collar job is true in many nations of Asia, especially China. 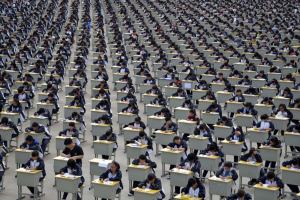 China amplifies the need for job security due to population size and limited resources. Becoming a pro-gamer in China is looked down upon, it’s a stigma. Yes, it’s cool to be good at games, with certain crowds of people, just like in the west but for most of the older generation, they’ll probably send you into internet addiction rehabilitation. Hell, I’m not even going to blame the addicts for trying to get away from Chinese society, it’s dismal. You’re born to work and you work ’til you die. If you’re rich then it’s a different story, you might go steal some money and move to another country or something. But anyway, the point I’m trying to push, is that no parent wants their child to be an athlete or entertainer (classical musicians are fine). There’s a reason why China has one of the lowest registration rates for football players in terms of population, there’s no point, it’s not a future and if you don’t make it, the social security web is way too low to sustain you.

Failure means you are now seen as a failure for life, you will toil away in some menial day job while people shame you behind your “He never studied hard enough, what a lazy cunt”. This white collar chokes out all the individuality out of the people. Why risk becoming a pro League of Legends player?

Elo Boosting is just too lucrative, compared to playing fair

Elo boosting is horrible for the growth of talent in League of Legends, destroys the ‘rating’ part of match making rating. This is one of the reasons why in China only a few servers are even taken seriously. How do we even know if the current native Chinese talents like TBQ are even legitimate? (Okay I’m taking this a bit too far) But once boosting becomes rampant like in China, it disallows or can demotivate a portion of upcoming talent to reach their potential.

Players like Xiaoweixiao  were paid $1400 for one boost. In a nation where approximately $4500 USD is the average salary, Xiaoweixiao was able to secure nearly a third of one year’s future retirement fund (excl. inflation) in one single boost. Ask yourself, would you boost if you were in his shoes. Yes he knows, he is destroying the integrity of solo queue, but Chinese solo queue’s integrity died long ago.

The face of a working man

Within Tieba (Chinese Reddit), a sub-forum for just elo boosting pricing  exists. It has nearly 13000 subscribers and all in the public. It does make you question if Tencent even cared for League of Legends E-Sports apart from the whole marketing side. Sure, Riot does the random hard banning on a player like HK E-Sport’s Raison  or CLG (for account sharing) but most of the time players are either let go for a simple 2 week ban or a blind eye is turned. Yes, this could be related to just poor and inconsistent judgement from the company it. However, the point stands that there really is nothing being done to it, even if Riot tries as elo boosting is a thriving industry now.  Just look at the Chinese gold farmers generalisation. World of Warcraft tried to eradicate real world trading but it’s still going as strong as ever.  You cannot eradicate elo boosting in a nation where the wage gap is huge. People need to eat and they will find ways to do it, and there will always be people that have more money than time in China.

The LPL can adjust all it wants, but if it’s foundation is built on a huge turd of a society, not matter how much you polish it, it’ll just become a mushier turd. Society has to change first and it’s not going to change for League of Legends. So for the foreseeable future, we will just keep seeing money being poured into the gaping ego wound of China, where no one will admit to being wrong.  There’s just too  much going against the development of Chinese players.